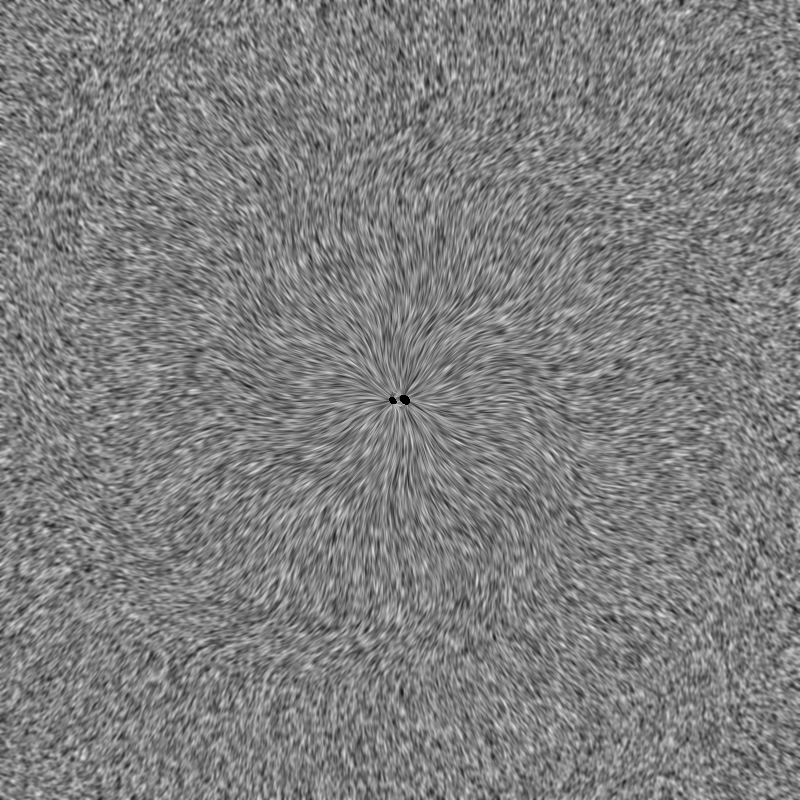 General relativity is a notoriously tricky subject to communicate. Human beings have evolved to hold a visceral feeling that the world around them is a three-dimensional space, endowed with the structure of Euclidean geometry. When told that the universe is better understood as four-dimensional, we take the point as either cute but irrelevant, or as some kind of mythic, metaphysical statement. The situation becomes even worse when we try to deal with the fact that the four-dimensional universe does not satisfy Euclidean geometry, but rather that it’s intrinsically “curved.” To communicate this fact, we tend to envision curved space with pictures called embedding diagrams. These are pictures of two-dimensional surfaces in three-dimensional Euclidean space, where the two-dimensional surface is curved in the same way as some slice of spacetime, and our usual geometric intuition is accurate due to the assumption of a Euclidean “embedding space.” Such pictures are staples of introductory texts in general relativity, public lectures, and the like, and they are very good tools for certain purposes. But they have their weaknesses. For one, they can only be constructed for two-dimensional “slices” through the four-dimensional universe. So generally one loses a lot of information in them. Another problem is that such embeddings simply might not exist. The fact that the universe is curved does not necessarily mean that it’s a surface within a larger Euclidean universe. Spacetime is intrinsically curved, and in physics we describe that curvature without ever having to resort to some higher-dimensional space. This physical statement corresponds to a mathematical reality: not all two-dimensional geometries can be realized, mathematically, as surfaces within a three-dimensional Euclidean space. There are deep, powerful mathematical theorems about the existence of embeddings, but sadly they only ensure that an embedding exists within a space of some dimension. In all but the simplest of cases, that dimension will be greater than 3. So unless you’ve been endowed a power that even we relativity theorists lack, the power of comprehensively visualizing spaces of four or more dimensions, embedding diagrams won’t take you particularly far.

Another difficulty with embedding diagrams is that while they provide a nice intuitive picture of the geometrical consequences of spacetime curvature, they fail to communicate the dynamical consequences. It’s not just curvature of space that we’re talking about, it’s curvature of spacetime. After all, that’s why this curvature is relevant for physics, because it implies the phenomena that we’ve always associated with gravity. I can’t look at an embedding diagram and infer any information about the motion of particles from it, and because I’m a physicist, that’s what I care about most.

This difficulty was not lost on Kip Thorne, the fearless leader of the SXS collaboration, who puts a great deal of effort into communicating the nature of the gravitational field to the broader public. He had long been vexed by the dearth of tools to communicate spacetime geometry in a visual manner. When he talks about the subject, he brings it back to his advisor, John Archibald Wheeler, a giant of twentieth-century physics, who drove science forward as much by penetrating intuitive ideas as by rigorous derivations. Wheeler would frequently devise such intuitive ideas, described in poetic, visual, aesthetic terms, and then assign his students to fill in the details. When the details were finally filled in, the original intuition would remain the basic currency of the idea. Black holes, wormholes, quantum foam, “it from bit”, the idea of antiparticles as particles moving backward through time, these ideas came from Wheeler, with details worked out usually by his students.

One such idea was “geometrodynamics”, a vision Wheeler set out to Thorne himself, for describing the dynamics of spacetime geometry in a language similar to the well-established language we use for electricity and magnetism, “electrodynamics.” This is still a long-term goal (and a vague one at that); I can’t claim that we’ve cracked it. But Wheeler’s vision has driven much of my collaboration’s work on the subject.

My work on black hole spin and higher multipole structure led me to realize the importance of two quantities on black hole horizons, the Gaussian curvature and the curvature of the normal bundle. The coloration in the picture at the right shows this latter curvature quantity on two horizons in the process of merging (the surrounding wireframe shows the “common horizon” of the merged hole). The spin axis of the black holes points from the center of the blue splotch to the center of the red splotch. When Kip Thorne saw these pictures, his interest was piqued especially when I told him that these quantities were also closely related to particular components of the “electric” and “magnetic” parts of the Weyl tensor. In relativity theory, electromagnetism is described by a matrix-valued field called the Faraday tensor, whose two indices range over the four dimensions of space and time. The three “time-space” components of the Faraday tensor encode the three components of what we normally call the electric field, and the “space-space” components, suitably shuffled, encode the magnetic field. It’s long been known that the Weyl tensor, which mathematically encodes the gravitational parts of spacetime curvature, could be decomposed in a similar way, and even that the “gravitoelectric” and “gravitomagnetic” components actually satisfy field equations directly analogous to Maxwell’s equations (the fundamental equations of electricity and magnetism).

Let’s take a step back from mathematical abstraction here, and talk about the basic consequences of gravity. We think of gravity as a force that “pulls things down.” Or in astophysics, it’s a force that “pulls things together.” That description is perfectly reasonable within particular contexts, but one of the ironies of Einstein’s theory is that it made this basic understanding of gravity into something fundamentally superfluous, and even misleading. When I’m skydiving, it’s natural for me to think that I’m falling toward the Earth. But the relativity in general relativity refers to the fact that in Einstein’s description there is no preferred frame of reference to describe gravity. When I’m skydiving, it’s just as accurate for me to say simply that I’m in my natural state of freefall, but that the Earth happens to be accelerating upward toward me! Maybe some force is pushing the planet up towards me, but fundamentally that’s the planet’s business, not mine. In general relativity, acceleration is not a “relativistically invariant” concept.

What is relevant is a higher-order phenomenon known as tidal stretching. As I plummet feet-first toward the Earth, my feet are consistently closer to the Earth than my head is. As a result, even in Newtonian gravity, my feet are consistently pulled with slightly more force than my head is. Along with this, my right arm is pulled slightly to the left as I fall (because it’s pulled toward the center of the Earth), and my left arm is pulled slightly to the right. So as I’m falling, I get stretched along the vertical axis, and squeezed along the horizontal axes. If I were skydiving into a black hole, these effects would become very strong, so strong that we give them a name, spaghettification.

This is not the only effect associated with strong gravitational fields. There’s also another phenomenon, known as the dragging of inertial frames, by which rotating objects pull nearby objects to rotate in a similar way (roughly speaking). This, again, is not a fully unambiguous statement, because an observer can rotate in sync with any rotating object, and hence transform this rotation away. However an object with nonzero size will experience differential frame dragging, by which, for example, one’s feet might be made to rotate slightly more strongly than one’s head, causing an overall twisting that would be quite unambiguously measurable (and painful) if strong enough.

When Kip Thorne got to thinking about my statements that the “electric” and “magnetic” parts of the spacetime curvature are relevant to the dynamics of black hole horizons, he set himself to thinking about the physical meaning of these quantities. The electromagnetic fields are “vector” fields, meaning that they can be visualized as arrows that point in some direction in physical space. This also means that they are described mathematically by three components, one for each dimension of space.

The gravitoelectric and gravitomagnetic tensors are a bit more complicated. They’re tensor quantities, described by symmetric matrices in space, and . It’s very well known in general relativity theory that is the mathematical object that fundamentally describes tidal stretching and squeezing. What’s less well-known, and what Thorne proved for the little collaboration that he put to gether to study this problem, was that the gravitomagnetic tensor is associated with the twisting associated with differential frame dragging.

This insight gave us the intuitive foundation for a scheme to visualize spacetime curvature through a system of field lines like those in electromagnetism. In electromagnetism, the field lines always point in the direction of the electric or magnetic field. In our formalism (which we call the vortex/tendex formalism, after the names tendicity and vorticity that we give to the phenomena), the tendex lines point along any of the three eigenvectors of the gravitoelectric field matrix , and the vortex lines point along the eigenvectors of the gravitomagnetic field . Here I’m showing an image of the gravitational wave production from a rotating perturbation on a Schwarzschild black hole. If you were lucky enough to be nearby such a black hole to make measurements, you would find that the passing gravitational waves stretch you along the blue lines, and squeeze you along the red lines.

This basic insight about visualizing the dynamical effects of the gravitational field through the patterns of stretching and squeezing was only the beginning of a very long story. We published the main ideas in a notable paper and have since published three followup papers. The collaboration still meets regularly, and we hope to expand on these ideas even further in the coming years, particularly by exploring the detailed dynamics of black hole collisions.